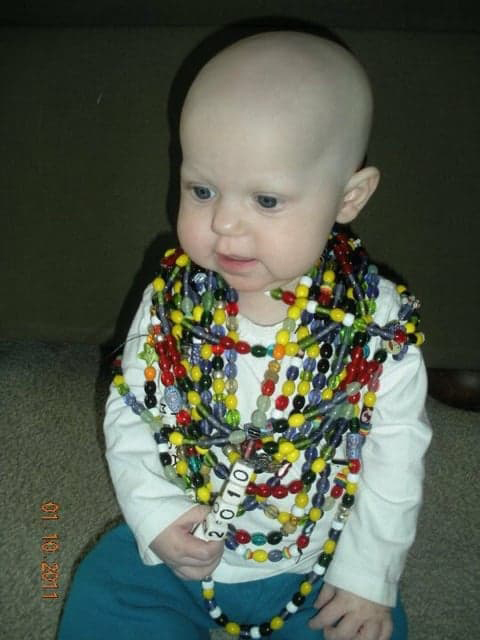 Miranda Skye Jackson was born on March 31, 2010 with her twin sister, Madison.  On August 10, 2010, at just 4 months old, Miranda was diagnosed with Acute Myeloid Leukemia (AML).  She went thru 5 rounds of intense chemotherapy during our 100 plus nights in the hospital.  She had countless needle pokes, tests and procedures.  With great success she was in remission 3 months into her treatment.

Miranda was behind for her age but with help from her twin sister and physical therapy she got right back to being a little kid again.  After a year and a half of being in remission Miranda’s AML relapsed on August 8, 2012.  We were told that she had to have a Stem Cell Transplant.  We later found out that Madison was a match and she was going to be her donor.  We were in the best place for a worst-case scenario.

Miranda went thru 2 rounds of chemotherapy to “prepare” for the transplant.

From the chemo she had a very low immune system and caught an extremely rare mold infection called Fusarium.  She started on a medicine that only has a 33% chance of working, but with no immune system we were left with few options.  The mold was in her blood and was taking over her entire body.  It appeared on the skin like a rash but then the spots would turn into a black lesion.   Unfortunately, a couple days later the doctors said there were no other treatment options for Miranda, so we decided to take her home where she could be comfortable.

After spending 75 days in an isolation room, Miranda’s face lit up when she got her first breath of fresh air.  Miranda loved having the freedom of a normal 2-year-old.  During the 10 unforgettable days at home she played with her dogs, blew countless bubbles and played on her swing set with her sister.  Half of my heart died as I watched my daughter take her last precious breath. On October 30th, 2012 my sweet Miranda earned her angel wings surrounded by the ones she loved.

When Miranda was diagnosed all I wanted was Kleenex and a notebook. No one had any. So, when she passed I decided I wanted to provide them for moms.

In honor of my sweet girl, Miranda’s Skye Hug are bags that are put together annually for moms of children newly diagnosed with cancer that are not sure of what to expect coming into the oncology floor. They contain essential items such as chapstick, pens, paper, shampoo, toothpaste, lotion, real tissue, and much more to help get through the first days of diagnosis at the hospital.

You can read more about Miranda’s Skye Hug by clicking on the Special Projects page.