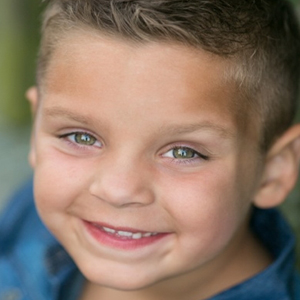 On December 23, 2011 Rusty was diagnosed with an inoperable brain tumor in the pineal region of his brain, which had metastasized, down his spine. January 6, 2012 a biopsy was performed which revealed a diagnosis of Pineoblastoma, a malignant supratentorial primitive euroectodermal tumor (sPNET). Rusty began intense chemotherapy at Lurie Children’s Hospital in Chicago. His plan was complicated by several PICU stays from overwhelming infections. Rusty lost the ability to walk and was wheelchair bound for several months while relearning to use all of his muscles at The Rehabilitation Institute of Chicago. He underwent two autologous stem cell transplants before undergoing 30 proton radiation treatments at ProCure in Warrenville, IL. Rusty’s May 21, 2014 MRI of the brain and spine heartbreakingly showed a new tumor growing in his left cerebellum. He officially relapsed and was given a zero chance of survival. Rusty passed away on March 19, 2015.

Rusty loved baseball and his dream was to play for the New York Yankees. His greatest strengths were compassion for others and his faith in Jesus.

Rusty’s Hope, Inc. was established in memory of Russell “Rusty” Schultz to bring hope of a cure to pediatric brain cancer patients and their families by funding pediatric brain tumor research at Lurie Children’s Hospital in Chicago.

The  mission of Rusty’s Hope, Inc. is to bring awareness to pediatric brain cancer by sharing Rusty’s story in hope of raising funds to aid research dedicated to a different fate for children diagnosed with brain tumors.